Book Review: Hotel on the Corner of Bitter and Sweet by Jamie Ford 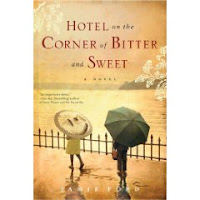 "Hotel on the Corner of Bitter and Sweet" by Jamie Ford


Published by Ballantine Books, a division of Random House, Inc.

The book begins in 1986 and follows Henry Lee, a Chinese-American whose wife has recently passed away. He is dealing with his heartache and a strained relationship with his grown-up son Marty. The Panama Hotel, a renovated hotel in what was once Seattle's Japantown, recently discovered belongings that were once hidden there by Japanese immigrants in WWII. This news sparks Henry's memories of his youth and flashbacks to the 1940s when Henry had developed a close relationship with a Japanese girl named Keiko. Henry's father however, was a strict advocate for his Chinese heritage, forcing Henry to wear a pin stating "I am Chinese" and showed a stubborn dislike of all things Japanese. Henry's relationship with Keiko, set to the backdrop of WWII, forces him to grow up quickly and make difficult and sometimes dangerous decisions in order to fight for what he believes in.

I enjoyed this story from start to finish. It is surprising that this is Jamie Ford's first novel because his writing is so professional and polished while retaining its passionate flair. Henry and Keiko are two of the most endearing characters I have ever encountered and it is hard not to feel connected to them and become deeply invested in their outcomes.

"Hotel on the Corner of Bitter and Sweet" also explores important issues of culture and the ramifications of prejudice, proving that there is more depth to this sweet story than meets the eye. Though it's often hard for an author to separate his or her own personal judgments and opinions, Jamie has done his best as he so eloquently states in his author's note:
"My intent was not to create a morality play, with my voice being the loudest on stage, but rather to defer to the reader's sense of justice, of right and wrong, and let the facts speak plainly."

Though there were predictable elements in the storyline, I still soaked up every detail of this novel and read it in one sitting. My emotions were tied up in the characters and I even cried at the end.

I highly recommend this book to anyone looking for a heartwarming story that explores many issues and is ultimately filled with much needed hope!


BIG THANKS to Jamie and Random House for my review copy of this book.
Posted by Sheri S. at 8:00 AM

I am really looking forward to reading this book. Thanks for the link to Jamie Ford on Twitter - I'm following him now.

I’m just dropping by to let you know that I’ve given you an award! http://athomewithbooks.blogspot.com/2009/03/awards-roundup.html

Glad to see you liked this one. I'm looking forward to reading it for a January TLC tour. I hope it's okay that I linked to your review on War Through the Generations.