Guest Post: Katherine Center, author of "Everyone is Beautiful"

The Truth About Cupcakes
© Katherine Center 2009


The truth about cupcakes is that most of them look a lot better than they taste.

I know this from experience. 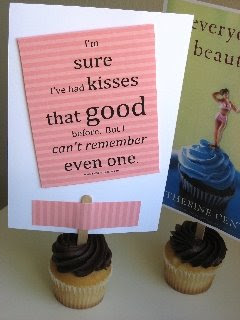 For the Mom 2.0 Summit in Houston this year, I decided to bring cupcakes with me to the speakers’ dinner. I had this idea of making toppers for them with quotes from Everyone Is Beautiful, and the notion completely swept me up.

There were 50 speakers. And making 50 handmade cupcake toppers turned out to be a heck of a task. I spent hours leafing through the book, marking passages with post-its. Then more hours typing the quotes up and laying them out. Then the pasting and assembling. It wound up taking several days to get it done.

And meanwhile, every day, my kids and I were tasting cupcakes all over town. Because I wanted to find cupcakes that looked just like the cupcakes I remembered from my childhood. And I wanted them to taste as good as those had, too. I wanted to find that old thrill.

The first place we tried had cupcakes with magazine-quality icing. But the “cake” part tasted like a corn muffin. We licked all the icing off and left lumps of cake.

The second place’s cupcakes were sleek and modern. And no fluffy dollup of icing on top--the icing on these was flat and perfectly round. And they weren’t sweet enough. Or maybe they were too sweet. We mostly drank our milk.

We tried red velvet cupcakes, cream cheese cupcakes, regular and jumbo-size cupcakes. We went to grocery stores, bakeries, and cupcake shops—both in town and outside it.

After a week and a half, I‘d pick up my kids and say, “Guess what we’re doing?”
And they’d shout, “No more cupcakes!”

In the end, I never found the cupcakes I was looking for. I finally chose standard-issue grocery store cupcakes with a buttercream icing that tasted pretty good. 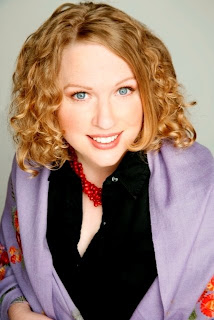 ABOUT THE AUTHOR:
Katherine Center’s second novel, Everyone Is Beautiful, is featured in the March issue of Redbook. Kirkus Reviews likens it to the 1950s motherhood classic Please Don’t Eat the Daisies, and says, “Center’s breezy style invites the reader to commiserate, laughing all the way.” Booklist calls it “a superbly written novel filled with unique and resonant characters.” Katherine’s first novel, The Bright Side of Disaster, was featured in People Magazine, USA Today, Vanity Fair, the Houston Chronicle, and the Dallas Morning News, among others. BookPage named Katherine one of seven new writers to watch, and the paperback of Bright Side was a Breakout Title at Target. Katherine recently published an essay in Real Simple Family and has another forthcoming in Because I Love Her: 34 Women Writers on the Mother-Daughter Bond this April. She has just turned in her third novel, Get Lucky, and is starting on a fourth. She lives in Houston, Texas, with her husband and two young children.
You can visit her website at http://www.katherinecenter.com/
ABOUT THE BOOK:
Lanie Coates’s life is spinning out of control. She’s piled everything she owns into a U-Haul and driven with her husband, Peter, and their three little boys from their cozy Texas home to a multiflight walkup in the Northeast. She’s left behind family, friends, and a comfortable life–all so her husband can realize his dream of becoming a professional musician. But somewhere in the eye of her personal hurricane, it hits Lanie that she once had dreams too. If only she could remember what they were. 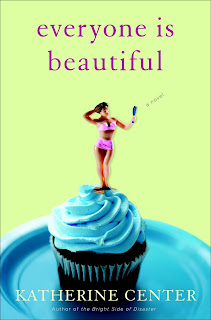 These days, Lanie always seems to rank herself dead last–and when another mom accidentally criticizes her appearance, it’s the final straw. Fifteen years, three babies, and more pounds than she’s willing to count since the day she said “I do,” Lanie longs desperately to feel like her old self again. It’s time to rise up, fish her moxie out of the diaper pail, and find the woman she was before motherhood capsized her entire existence.
Lanie sets change in motion–joining a gym, signing up for photography classes, and finding a new best friend. But she also creates waves that come to threaten her whole life. In the end, Lanie must figure out once and for all how to find herself without losing everything else in the process.
Katherine Center’s Everyone Is Beautiful is a hugely entertaining, poignant, and charming new novel about what happens after happily ever after: how a woman learns to fall in love with her husband–and her entire life–all over again.
BIG THANKS to Katherine for her wonderful guest post and Dorothy for organizing this great tour!

Isn't Dorothy the best? I totally love her!

Thank you so much for all your kind words, and for allowing me to be a guest at your teriffic blog!

Oh, the cupcakes from our youth! What a great post and I know what you mean, today things don't seem as good as when I was young. Too bad you didn't find that perfect cupcake. I'm glad I haven't...my hips haven't forgiven me for the not perfect ones I have eaten:)

I'm going to tell you what I liked about this. This author was assigned to write a guest post for Bookopolis as part of her virtual book tour. Instead of writing a guest post about how she got started in the biz or what her book was about, she found an aspect of her book and wrote about not, not once mentioning her book. In years past, I was brought up that if you are being interviewed (that might be a little different) or write a guest post for someone's blog, mention your book or your company or whatever as many times as you can without seeming facetious about it. Katherine didn't mention her book once so I felt she was really writing the story for me and not to sell her book. WTG, Katherine. And I also would like to mention that this tour was presented to Katherine not too long ago and she didn't have as much time to prepare as some authors and I think she has done a splendid job. Thank you, Katie at Random House, for sending her to us, and thank you, Sheri, for allowing Katherine to grace your blog with her presence.

Katherine, one of the things that I've learned in life is that no matter what I make, it always tastes better when my mother makes it. Just ask my daughter!