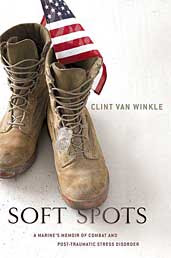 Publisher's book description:
"A powerful, haunting, provocative memoir of a Marine in Iraq—and his struggle with Post Traumatic Stress Disorder in a system trying to hide the damage done
Marine Sergeant Clint Van Winkle flew to war on Valentine’s Day 2003. His battalion was among the first wave of troops that crossed into Iraq, and his first combat experience was the battle of Nasiriyah, followed by patrols throughout the country, house to house searches, and operations in the dangerous Baghdad slums.
But after two tours of duty, certain images would not leave his memory—a fragmented mental movie of shooting a little girl; of scavenging parts from a destroyed, blood-spattered tank; of obliterating several Iraqi men hidden behind an ancient wall; and of mistakenly stepping on a “soft spot,” the remains of a Marine killed in combat. After his return home, Van Winkle sought help at a Veterans Administration facility, and so began a maddening journey through an indifferent system that promises to care for veterans, but in fact abandons many of them.
From riveting scenes of combat violence, to the gallows humor of soldiers fighting a war that seems to make no sense, to moments of tenderness in a civilian life ravaged by flashbacks, rage, and doubt, Soft Spots reveals the mind of a soldier like no other recent memoir of the war that has consumed America."

My opinion:
"Soft Spots" is a really unique memoir because of how swiftly the present narrative shifted back to the past, as Sgt. Clint Van Winkle experienced it. It took some time to get used to the rapid changes of setting and characters, but once I did, I think it made the reading experience more interesting. These shifts also offer readers a glimpse into Sgt. Clint Van Winkle's mind and the repercussions of a life with post-traumatic stress disorder. There is also a blur between fact and fiction, because as Sgt. Clint Van Winkle explains, "truth lives where that piece of my soul once did and visits me briefly in sleep - only to disappear with waking".
This isn't a heart-warming book with a happy ending. It's not supposed to be. This book contains an important glimpse into the reality of one man's journey, and yet speaks volumes about the biggers issues of war and PTSD, as well as their ramifications. Yes, some parts were hard to read, but such is the reality and is something we need to confront and address.
This book serves as a reminder of the power of war and its potential for damage to more than just the physical being. It is clear that only those who have lived through it can understand its effects. I think it was really brave of Sgt. Clint Van Winkle to expose his memories, pain and raw emotions on paper for the world to take notice. He has undergone different forms of therapy, but it is acknowledged that a piece of himself will always remain in Iraq.

BIG THANKS to St. Martin's Press and Katherine for my review copy and for organizing this wonderful tour.
Posted by Sheri S. at 11:00 AM

A friend of my son's spent time in Iraq and has since be diagnosed with PTSD. I don't think people realize how awful it is. Great review.

I think Sher's review really captured the nuance and revelativity of Soft Spots. For anyone who waited for a combat vet this book offers a rare insight to what they will not talk about. Do not assume everything is back to normal when they get back home. This book will serve as a reminder to combat vets that they are not alone.

I like reading war memoirs, and this one sounds like it would be a good addition to the ones that I have read.