Book Review: The Price of Silence by Camilla Trinchieri 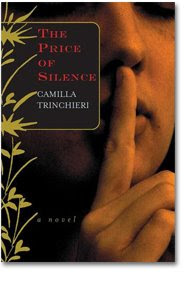 "The Price of Silence" by Camilla Trinchieri
Published by SOHO Press
Rating: 5 stars
Narrated from three different perspectives, "The Price of Silence" provides an insider's look into the life of Emma Perotti, who is on trial for the murder of her former student and friend, An-ling Huang. Through flashbacks, courtroom transcripts and emails, readers learn about the complicated relationships between Emma and her husband Tom, her son Josh and ultimately An-ling. There was something wrong with An-ling right from the start which Tom sensed but Emma refused to acknowledge. As Emma grew closer to An-ling, her connection to her husband and son weakened. The story centers around the dangerous consequences of obsession and jealousy, while showing just how far someone will go to hold onto what matters to them.

"The Price of Silence" blew me away. I was captivated right from the start and I literally did not want to put the book down. This book is a perfect combination of all the elements that make up a great psychological thriller. There is so much depth to each of the characters and as the book progresses, another layer of their character is exposed. Though it seems like all the facts are presented at the beginning of the book, nothing is at seems and there were twists and turns that I could not have predicted.

I was also amazed by how the author's writing style shifted between each character's narration. Camilla Trinchieri truly embodied Emma, Tom and Josh as if they really had completely separate identities. I found myself thinking about this story and murder trial as if it were real. Ironicaly, it was An-ling's character that was most real and alive to me, despite her being dead throughout the entire book. Her presence in the book was haunting as she cast such a powerful shadow over the lives of the entire Perotti family.

This impressive book is not to be missed!

BIG THANKS to Sarah and SOHO Press for my review copy.
Posted by Sheri S. at 12:30 PM

Multiple narrators is tricky to pull off ... sounds like Camilla Trinchieri did a great job with it!

Thank you for your review. We've listed it on Camilla's blog at http://www.CamillaTrinchieri.blogspot.com and quoted from your post, in a post with a linkback.

Camilla has a new book, Finding Alice, which is going to be published in Italian for a November 2009 release.