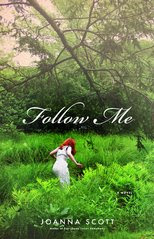 Follow Me by Joanna Scott [browse inside]
Published by Little, Brown and Company , a division of Hachette Book Group

Publisher's description of the book:
On a summer day in 1946 Sally Werner, the precocious young daughter of hardscrabble Pennsylvania farmers, secretly accepts her cousin's invitation to ride his new motorcycle. Like so much of what follows in Sally's life, it's an impulsive decision with dramatic and far-reaching consequences. Soon she abandons her home to begin a daring journey of self-creation, the truth of which she entrusts only with her granddaughter and namesake, six decades later. But when young Sally's father--a man she has never known--enters her life and offers another story altogether, she must uncover the truth of her grandmother's secret history.

My review: To be posted

Unfortunately due to a postal service mix-up this book was sent back to the publishers. Because of this, I still haven't received the book and therefore could not write a review in time for the blog tour. However, as soon as I receive the book and read it, my review will definitely be posted! 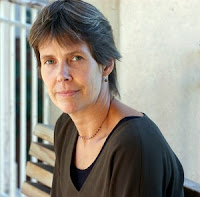 the author:
Joanna Scott is the author of nine books, including The Manikin, which was a finalist for the Pulitzer Prize; Various Antidotes and Arrogance, which were both finalists for the PEN/Faulkner Award; and the critically acclaimed Make Believe, Tourmaline, and Liberation. A recipient of a MacArthur Fellowship, a Guggenheim Fellowship, and a Lannan Award, she lives with her family in upstate New York.
Many thanks to Miriam for arranging this tour and for being so understanding about the post office mix-up!

Thankfully, there are MANY other wonderful blogs featuring reviews today of Follow Me as part of the Early Birds Blog Tours:

Thanks for posting about this even though the book has gone astray.

Too bad you didn't get the book on time. I think you'll enjoy it when you do get it.

I'll keep an eye out for your review. I hope you receive it soon!

I hope you like the book when it arrives. :)

Aw this sounds great! Hope you get it soon ^_^

I look forward to your review. :)

I look forward to your review. It sounds great.