Book Review: The World in Half by Cristina Henriquez 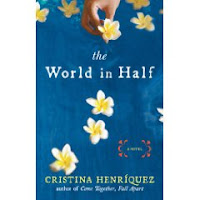 The World in Half by Cristina Henriquez

Published by RIVERHEAD BOOKS, a member of Penguin Group

This book is officially released today!

The World in Half is about Mira (Miraflores), a geophysics major who has recently discovered old letters written to her mother from her father. Although Mira's mother had always told her that her father never wanted a child and abandoned them, the letters told a completely different story. Her father wrote about his love and devotion to her mother and it was revealed that once he found out she was pregnant, he was excited to be a father. Mira is confused by this contradiction and wonders why her mother had lied to her. Mira is unable to confront her mother about it because she has early-onset Alzheimer's and besides, she knew her mother would never tell her the truth. Mira hires a nurse to care for her mother and heads off to Panama City to find the father she never knew. Once there, Mira questions her impulsive decision, which went against her usual rational behavior. One morning she encounters a young man who piques her interest and after hearing her story, volunteers to help her find her father. What starts off as a trip to meet her father ends up turning into a journey of self-exploration and self-discovery. Mira learns a lot about herself and struggles to come to terms with her own identity.

The World in Half is a beautifully written story that has a certain underlying magic to it. The characters are first introduced as one-dimensional, with simple thoughts and emotions. However, once the novel progresses, their depth and complexity become apparent and there is more to them than meets the eye. The plot itself it interesting, but I think the most compelling thing about the book is its quiet hold over the reader. I kept reading on further and further, not because of thrilling plot twists, but because I genuinely felt a connection to the characters and to the story.

I loved how Mira's search for her father turned out to be a search for herself. Her father represented all of the parts of herself and her identity that she was missing in order to feel whole. Exploring Panama City and learning about love helped open up her eyes. By the end, I really sensed her character's evolution and development.

This book has positive messages embedded throughout the narrative and Mira was the perfect vehicle for conveying them. Although it is possible to go through life without discovering who you are as a person, that is not living life but merely existing. The way things turned out for Mira was unexpected but it wasn't the ending that mattered, rather the journey it took to get there. The World in Half is a well-written story about characters you will care about and possesses a certain subtle power that will inevitably take hold of you.


BIG THANKS to Penguin Group for my review copy.
Posted by Sheri S. at 11:00 AM

Your review is fantastic - it makes me want to read the book. I love the cover too.

I hadn't heard of this book - your review is wonderful - makes me want to read it as well!

Great review! I just mentioned it in my Friday Finds post today.

hadn't heard about this until i popped over to your blog...sounds so good!! i love self-discovery stories...great review!