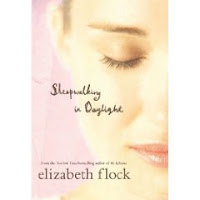 Sleepwalking in Daylight by Elizabeth Flock
Published by MIRA Books
Rating: 4.5 stars
Sleepwalking in Daylight begins with the thoughts of Samantha Friedman, who appears to be a devoted wife to husband Bob and dedicated mother to her 16-year-old daughter Cammy and her twin 8-year-old sons. All the other mothers envy how 'put together' she always seems but they would be shocked if they knew the truth. Her marriage is falling apart and Cammy barely speaks to her. The narrative then shifts back and forth from Samantha's point of view to Cammy's diary entries. Cammy feels like an outcast at school and experiments with sex and drugs in an attempt to numb the pain. At an early age Cammy discovered that was was adopted and is now seeking out more information about her birth mother and trying to come to terms with her own identity. Meanwhile, Samantha appears to be oblivious of Cammy's misery and alienation as she starts up a flirtation with a married man and further distances herself from the rest of the family. As the novel progresses, readers watch as both mother and daughter spiral out of control and then attempt to pick up the pieces, however in vastly different ways.
Samantha's problems are probably ones that every wife and mother feel every now and then. Her emotions and fears are captured incredibly well and I felt an instant connection to her. However, in comparison to Cammy, Samantha's troubles pale in comparison. Though Samantha is the more relatable one of the two, it was Cammy that left a lasting impression. Don't be fooled by the light-hearted (albeit beautiful) cover of the book, because there are some deep and painful issues explored in this story. Hearing about Cammy's pain and her consequent self-destructive behavior was really difficult. I found myself shedding tears at various points of her narrative, because I wanted so badly to end her pain. My frustration and anger at how Cammy's path unfolds however, is proof of how invested I became in this book and its characters.
Elizabeth Flock shows a great deal of insight and perception through the way she lets readers into the lives of Samantha and Cammy. I did feel like I was missing out a bit by not hearing Bob's side of the story, since he is mentioned so frequently and never has the opportunity to 'defend himself'. Nonetheless, the inner thoughts of Samantha and Cammy are captured so beautifully and truly captured my attention and most importantly my heart until the very end.

BIG THANKS to FSB Associates for my review copy

That sounds like a great book to remind is that the grass on the other side is not always as green as it appears.

I agree with Bermuda

i enjoy books with a family focus--it's refreshing to see an author highlighting a flawed life for a character who seems so perfect to outsiders. the family dynamic can be so rich with conflict--this book sounds like all the bases are covered. thanks for the review--i've got to check this one out!