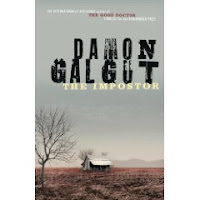 I requested this book from MiniBookExpo – BIG THANKS to Lex and Random House Canada!

“The Impostor” by Damon Galgut

Published by McClelland & Stewart, an affiliate of Random House of Canada

“The Impostor” is the story of Adam Napier, a lost soul who was recently fired and forced to leave his house. He takes residence in a country house that his brother purchased years earlier but has since been vacant. He seeks to reconnect with his inner poet, and spends much of his time alone in the quiet community in a rural part of South Africa. After a chance encounter with a childhood acquaintance named Canning, Adam’s quiet existence begins to take on new meaning. It does not take long however, for Adam’s involvement with Canning and his wife Baby, to become complicated and dangerous.

It comes as no surprise to me that Damon Galgut has received much recognition and praise for his writing, as his words and imagery were incredibly powerful throughout the novel. I felt Adam’s intense loneliness, as if it were a tangible presence, with the turn of every page. That is exactly why I have contradictory feelings about this book. On the one hand, Galgut’s writing transported me into the novel and I couldn’t help but read on to see how he would continue to convey such raw emotion. And yet, it is that same beautiful writing that left me with a gloomy feeling that was hard to shake.

It’s not that I only like books with happy endings or light material, but the bleakness of this book was striking. In that respect, saying that I enjoyed reading the book would be incorrect. Rather, I was in awe of the beauty of the writing and just how much I internalized Adam’s conflicts. I recommend this book because it is wonderfully written, even though the writing itself evokes some difficult emotions.
Posted by Sheri S. at 5:02 PM

What a great review!

"The Hong Kong Connection" is a legal thriller about a gutsy female attorney who takes on high ranking International officials. It's a taut, rollercoaster of a ride from New York to Palm Beach to Washington D.C. to Hong Kong. The plot is expertly woven, the characters persuasive, and the dialogue snappy and spot on.
www.StrategicBookPublishing.com/TheHongKongConnection.html