Kissing Games of the World by Sandi Kahn Shelton 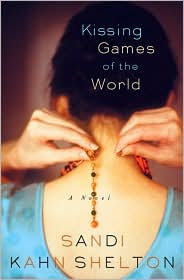 "Kissing Games of the World" by Sandi Kahn Shelton
Published by Shaye Areheart, a division of Random House
About the book:
Jamie McClintock, an artist who already has a precarious life caring for her asthmatic little son and struggling to pay the bills, doesn’t have time for love or romance. She and her son live in an old farmhouse with an elderly widower who is raising his grandson—but when her beloved elderly landlord dies of a sudden heart attack, her life is thrown into chaos.
When the late landlord’s estranged son Nate arrives in town to settle his father’s affairs and claim his son, Jamie discovers that the spirited old gentleman devoted to raising his young grandson was actually a philandering, deadbeat dad in his day. At least, according to Nate, a widower whose late wife’s accident left him bereft and entirely incapable of caring for the boy.
Jamie and Nate can’t stand each other from the beginning. He’s a self-absorbed, charismatic, world-traveling salesman who thinks being a dad means just letting his five-year-old son come along with him on his many business trips until he can convince his business partner girlfriend to marry him. He’s sure Jamie is just the latest of his dad’s girlfriends, and he’s only too happy to kick her and her son out of the house so he can sell it and get back to his life.
But then he discovers that being an instant dad isn’t so easy after all, especially when he’s blindsided by feelings of grief over the death of his father whose transgressions he never forgave. And even while he and Jamie are fighting over everything from children’s nicknames to Jamie’s odd-ball fashion choices to Nate’s home renovation methods, they discover that they have two little boys looking to them to ease their grief and loss. It’s not long before Jamie’s defensive self-preservation and Nate’s blustery bravado crumble under the laws of attraction.
In a story that is as much a humorous, poignant contemporary romance as it is the tale of a man coming to terms with his father’s desertion, readers will discover new twists to the modern-day mating dance. Sometimes, Jamie and Nate discover, the person you can’t stand is also person you also can’t stand to live without.
*************************************************
"Kissing Games of the World" is an incredibly enjoyable book with wonderful dialogue and endearing characters. It isn't every day that I read a book that makes me feel connected to each one of the main characters, which is the primary reason why this book is such a gem. It would have been impossible for me not to have cared about Jamie, Nate, Christopher (Nate's son) and Arley (Jamie's son) because they were so real to me, in the way they spoke and interacted, I felt like I knew them. While the plot does seem somewhat unrealistic, (which usually really bothers me), I was so drawn into the story and involved with the characters that I never needed to question whether the storyline was believable or not.
The chapters' narration alternates from Jamie's point of view to Nate's point of view, allowing for the complete range of inner thoughts and emotions from both main characters. Oftentimes they would both be analyzing the same events and it was so interesting to see how vastly different people can perceive the same circumstances.
This book is an excellent addition to the "women's fiction" genre, as it has all the perfect elements of romance, love and family. What I loved most about "Kissing Games of the World" is how intertwined the children's stories were with the adults' lives, and how accurately their feelings and thoughts were relayed. Many books place the children as secondary characters but Christopher and Arley were always considered and were central to the story's development. Plus, they were just so adorable and proved the saying, 'kids say the darndest things', to be true!
Sandi Kahn Shelton is a very talented writer and clearly has a knack for evoking just the right emotion through her writing. There were many times that I found myself laughing out loud and other times when I started to tear up. This is the first book of hers that I've read and I look forward to reading her first two novels!
Author Bio:

Sandi Kahn Shelton is the author of three novels, all contemporary novels about relationships and family, including What Comes After Crazy, A Piece of Normal, and the latest, Kissing Games of the World. She’s also the author of three nonfiction humor books about parenting, and is a feature reporter for the New Haven Register. For years she wrote the “Wit’s End” column for Working Mother magazine, and she has been a contributor to Redbook, Salon, Reader’s Digest, and Woman’s Day.
She’s been a writer for longer than she can actually remember—but she does remember her first sale. When she was 6 years old, her mother wouldn’t give her money for the ice cream truck, so she ran home and wrote a story and sold it to the neighbors for 20 cents. It was called “The King Who Slept For Three Hours and Forty-five Seconds” and she saw this as the beginning of a promising career path that would keep her in frozen desserts for the rest of her life.
You can visit her website at http://www.sandishelton.com/,and her blog at www.sandishelton.com/blog

BIG THANKS to Sandi for sending me her book to review and Jaime for organizing this great Pump Up Your Book Promotion tour!

Great review! I love books that make me feel connected to the characters. Though I'm usually sad when the stories end because they feel like old friends.