Book Review: The Devil, The Lovers & Me" by Kimberlee Auerbach 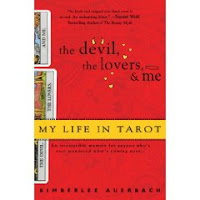 BIG THANKS to Megan and Penguin Group for this book!

“The Devil, The Lovers & Me” by Kimberlee Auerbach

Published by New American Library, a division of Penguin Group


“The Devil, The Lovers & Me” is Kimberlee Auerbach’s memoir about her journey towards eventual self acceptance and the hilarious and touching moments along the way and was originally developed from Auerbach’s comedic performances in New York. The book begins with Auerbach going to visit to a tarot card reader in the hopes of gaining insight into her past and direction for the future. The session Auerbach has with the tarot card reader spans the whole novel and each chapter is brilliantly centered on a different tarot card. Within each chapter, there are flashbacks to Auerbach’s life events according to the tarot card’s theme, which I really loved because it helped weave her story together. I have read my fair share of memoirs, but oftentimes there isn’t enough structure or purpose to which events the author has chosen to share. “The Devil, The Lovers & Me” is unique in that it reads like a novel and has just the right combination of depth and humor.

What really drew me into this book was Auerbach’s amazing storytelling ability and her insightful observations about her past. There is something about the way she tells her story that was both fascinating and incredibly hilarious. Despite some tough issues that are dealt with, Auerbach manages to find the humor in every situation and proves to be wiser than she originally realizes. With every story, there is something that anyone can relate to, from trouble with family to relationship drama and everything in between. While we may not all have fathers who’d buy an engagement ring for our boyfriend to propose with (before he even knows he wants to propose) or have felt jealous over our own mother’s sex appeal, there is something familiar about Auerbach’s stories that will make you feel like she is a close friend. This book is highly recommended!
Posted by Sheri S. at 11:51 PM