Book Review: The Darcys & the Bingleys by Marsha Altman 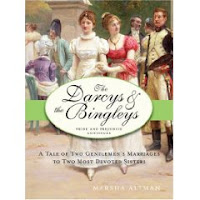 BIG THANKS to Danielle and Sourcebooks for my review copy!

"The Darcys & the Bingleys: Pride and Prejudice continues" by Marsha Altman


“The Darcys & the Bingleys” is a Pride and Prejudice sequel, which starts off with the preparations for the double wedding of Fitzwilliam Darcy to Elizabeth Bennett and his best friend Charles Bingley to Elizabeth's sister, Jane Bennett. The book is composed of two different books in one, with the first describing the wedding and their lives as newlyweds, and the second one about raising children and focuses a great deal on Charles’ sister Caroline and her future engagement.

This is the first Jane Austen sequel that I’ve read and it was very enjoyable. The storylines make it a nice and light read. While there are some dramatic scenes (and a swordfight!), the majority of the book is very sweet and subtle. Altman's writing is very poetic and she captures the 'Jane Austen' time period quite well with the right tone and use of language. I found that the characters remained just as charming and likable despite their obvious flaws as Jane Austen had intended. I especially appreciated reading the witty banter between Darcy and Elizabeth and their feisty yet incredibly loving relationship, which continued nicely from Pride and Prejudice.
Posted by Sheri S. at 7:46 PM