Book Review: Off the Menu by Christine Son 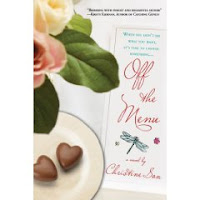 BIG THANKS to Catherine and Penguin Group for sending me this book to review!

“Off the Menu” by Christine Son

In Christine Son’s debut novel, “Off the Menu” follows the lives of three Asian-American women who have been close friends ever since they were all made Valedictorian of their graduating high school class. Whitney Lee, a hard-working lawyer, epitomizes success with a lucrative job and her loving boyfriend Scott, but things are not always as they seem because in reality Whitney has been ignoring her real passion and her dwindling relationship with Scott. Hercules Huang is a successful chef and businesswoman who gives off the illusion of happiness but inside struggles over her conflicting relationship with her father and her lack of any romantic connections. Audrey Henley, adopted into a billionaire dynasty, is on the road to completing her PhD while trying to come to terms with her heritage and her parents’ disapproval of her fiancé. Though their friendship has lasted for many years, these women have never shared with each other their inner feelings about culture, their hidden aspirations or the true nature of their relationships with their families. Their monthly ‘Valedictorian dinners’ typically involve bragging about their accomplishments, however after their first overnight trip together, everything changes.

“Off the Menu” deals with more than just the ‘typical’ issues that are often explored in novels, allowing for a deeper and more meaningful read. Culture and heritage play an important role in each of the women’s lives and their relationships with their family and friends. They are always trying to hide their true ambitions for fear of failure and disappointing their loved ones. In the conversation with Christine Son (located at the end of the book), she reveals that very few people even knew she was writing a novel because she wanted to avoid others’ pity that would inevitably arise if her novel wasn’t published. Reading that confirmed my intuition that Son had incorporated some of her real-life feelings and values into the novel. Having a part of the author weaved throughout the book enhanced the novel’s authenticity and really made the characters come alive.

This book was an incredibly fast read because I became so engrossed in the lives of all three women, whose stories were equally engaging and interesting to read about. It took a little while to become accustomed to the ‘southern twang’ (Y’all!) but once I did, I came to enjoy it! Son’s beautiful writing style is captivating and I really enjoyed this book. I look forward to reading more from her in the future!


Be sure to check out Christine Son’s TLC Book Tours TOUR STOPS:

For more info you can also visit Christine Son’s website
Posted by Sheri S. at 6:30 PM

Sounds great! I love stories about immigrants in our society.

I just finished it about two days ago! I totally agree about the Y'all thing! It was a great book! I just wish the ending had taken a little longer to wrap up.

Hi Sheri! Thanks so much for linking Christine's TLC tour stops here. Your review is terrific!

I can't wait to read this one! I'm excited about my tour date!