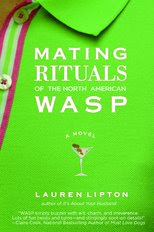 Mating Rituals of the North American WASP by Lauren Lipton
Published by 5-SPOT, a division of Hachette Book Group

Publisher's description of the book:
After arguing with her live-in boyfriend about his inability to commit, Peggy Adams flies to a friend's bachelorette party in Las Vegas, and wakes up next to a man she can't remember. Hung-over and miserable, she sneaks out of the sleeping man's hotel room and returns home to New York, where her boyfriend apologizes for the fight and gives her a Tiffany box containing a pre-engagement ring. Not what she expected, but close enough! The next day she receives a phone call from the Las Vegas one-night stand, Luke, claiming she's already married to him¬-and he faxes her the license for proof! Both are ready for an annulment, until Peggy arrives in quaint New Nineveh, CT, where Luke cares for his Great Aunt, and the old woman makes Peggy an offer she can't refuse.
My review:
This book satisfies all the criteria for a great beach read: light, funny and a satisfying ending despite its predictability. I really liked reading about the world of "WASPs" and the challenges Peggy faces when trying to fit in with them. It was almost like reading about a completely different culture, with the specific clothing, behavior and "mating rituals".

Eventually Peggy's New York City life during the week starts to collide with her Conneticut weekend life and of course things get complicated. Life never turns out as we expect it to and in this book a chance enounter proves to be a life-altering experience. Though the plot is pretty unrealistic, it's still fun to read about what's going to happen next.

Lauren Lipton is a journalist who specializes in lifestyle, business, fashion, and trend stories. Her work has appeared in the New York Times, the Wall Street Journal, Conde Nast Portfolio, In Style Weddings, Martha Stewart Weddings, Forbes Woman, Glamour, Marie Claire, and on National Public Radio's All Things Considered. She lives in New York City and in Litchfield County, Connecticut.

BIG THANKS to Miriam for arranging this wonderful tour and Hachette for my review copy.


There are many other wonderful blogs featuring reviews today of this book as part of the Early Birds Blog Tours:

I enjoyed this book. I have to admit though, that some of the WASPish behavior reminded me of things in the Deep South.