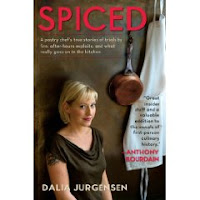 Spiced: A Pastry Chef's True Stories of Trials by Fire, After-Hours Exploits, and What Really Goes on in the Kitchen by Dalia Jurgensen

Published by Putnam Adult, a division of Penguin Group (USA)

Dalia Jurgensen left her office job in the pursuit of a career in the culinary arts and quickly started off interning at Nobu, one of NYC's hottest restaurants filled with many V.I.P. customers. From there she worked at different restaurants, as well as a chef for Martha Stewart's TV show and a caterer in between. Spiced is the story of how Dalia navigated through the male-dominated kitchens and also provides details about her personal life during that time.

I found this book to be pretty entertaining, especially the insider's look into restaurant life and what really goes on in the kitchen while customers await their meals (which did frighten me at times!). There were a couple anecdotes about celebrity customers that were really fun to read about, although I wish I could have heard some more.

I enjoyed reading about the politics of the kitchen and how each restaurant has their own unique hierarchy for all the staff. It was also interesting to learn about the relationship between those who prepare/make the food and those who serve it, given that the chefs often view their jobs as a calling, while the waiters tend to think of their jobs as a means to some other end.

Jurgensen's decision to include a lot about her social life was smart because it helped paint the complete picture of what life is like in that milieu. I learned about the late night staff parties and bar cruising, not to mention the consequent lack of sleep. Some restaurant staff are wilder than others, and I was shocked to hear about some of the crazy antics that can occur once the last customer has left. There was also a fair bit about Jurgensen's romantic life but in my opinion much of it was unneccesary and didn't really help enhance the book.

I was a little disappointed that after reading all about these wonderful pastries, that none of the recipes were included as a glossary (not in my advanced copy, at least), but thankfully there are some wonderful recipes on Dalia's website that can be found here. I actually tried the brownie recipe and they were delicious!

Overall, I think this book provides an interesting look behind-the-scenes of some very busy and successful kitchens, while offering insight into what it's like working as a woman in those environments. Though the book concludes before describing Dalia's recent years, it still offers a nice overview of her experiences and how she became what she is today.

BIG THANKS to Penguin Group for my review copy.
Posted by Sheri S. at 1:30 AM

Glad that you enjoyed this one. I was tempted to pick it up over the weekend but I went with The Convenient Marriage and 9 Live instead. But it sounds like it should be a good read.

I know I would want the recipes too. Hopefully they'll include something in the final copy.

My husband's not much of a reader, but he grabbed this book when it came in and read it in a couple of nights. He enjoyed it, but I can't get him to write a review. :(

sign me up for this one!!!! i love to cook vicariously! we eat out with alarming frequency and i'd love to know what goes on behind the scenes--we actually had a great dinner in NYC last night. :)

This sounds like a great read, thanks for the review.

Looks like an entertaining read! Glad you enjoyed it. But, true, what is up with the recipes?

Glad to hear you enjoyed this one. I'm looking forward to reading it at some point. I love food-related reads.

I enjoyed this book as well. I gave it to my boss thinking she would really like it as well. She was put off by the relationship information, but enjoyed the Martha Stewart section. I am going to try some of the recipes as well. Nice review.