I'd like to thank Linda Lappin very much for stopping by Bookopolis to share her inspiration for her new book "Katherine's Wish" and how the book came about!! 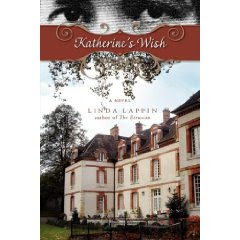 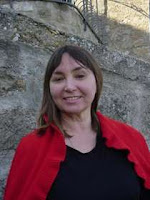 On January 13, 1923, George Ivanovic Gurdjieff, the much-discussed spiritual leader of the last century, publicly inaugurated his Study House, a refurbished airplane hangar erected on the grounds of the Prieure des Basse Loges, a former Carmelite monastery in Fontainebleau outside Paris which housed Gurdjieff’s Institute for the Harmonious Development of Man. Gaily decorated with arabesques, spread with rich, oriental carpets, furnished with a small fountain illuminated by multicolored lights, this exotic corner of the East transported to the environs of Paris exerted a magnetic attraction over a great number of intellectuals, writers, artists, dancers, musicians who flocked there to witness the extraordinary performances of Gurdjieff’s Sacred Dances and Movements, accompanied by stirring, melancholy piano music composed by Thomas deHartmann with the master Gurdjieff. Once open to the public, the Study House welcomed celebrities like Diaghliev and Frank Lloyd Wright, but just days before its official inauguration, another illustrious person had sat in the front row of the audience, wrapped in a fur coat, and watching the dancers intensely: Katherine Mansfield. This pioneer of the modernist short story and exquisite diarist spent the last three months of her life as Gurdjieff’s guest. Katherine did not live long enough to participate in the gala celebration of January 13th, for she had been buried the day before in the Cemetery of Fontainebleau- Avon after dying of a hemorrhage on January 9 at the age of 34.

Mansfield had come here after a long, sterile journey seeking health, which had begun in 1918, when she discovered she had tuberculosis. From that moment on, her life had been a restless pilgrimage, crisscrossing Europe on trains, accompanied by her companion Ida, separated most of the time from her husband, John Middleton Murry, looking for a better climate, a new cure, a home. But how had this writer from New Zealand, a little land with no history, ended up here knocking at Gurdjieff’s door?

This story had interested me for years – and my new novel, Katherine’s Wish, attempts to answer, in part, the question as to why she Mansfield went to Fontainebleau. I worked on this novel for many years – reading and re-reading Mansfield’s work, her letters and diaries, and those of her friends and associates, studying criticism of her stories, gathering historical information, sifting through unpublished articles, memoirs and hard-to-find resources, visiting places connected to her life – including the Prieure, where I managed to take a photograph of the interior while the building was being renovated a few years ago. At one point I became so saturated with content, it was imperative to do something with it all. I began with the idea of writing a screenplay, but then, after a pilgrimage to Fontainebleau, wrote an essay entitled “The Ghosts of Fontainebleau,” which was later published by the Southwest Review. Friends and editors suggested I turn that essay into a piece of fiction. It began as a short story, later nominated for the Pushcart prize, and then became a novel.

Katherine’s Wish closely follows the chronology of Mansfield’s life, explores her artistic and spiritual quest - for writing and spiritual concerns were always linked for Katherine Mansfield, as well as her most intense relationships, with Murry, Ida, and with DH Lawrence and Virginia Woolf, who appear as minor characters. There is an entire chapter devoted to Mansfield’s friendship with Viriginia Woolf. My technique has been to use some of Mansfield’s own techniques in my narrative, weaving ideas, themes, symbols from the stories, and moods and episodes from the diaries and letters, into a multi-layered fabric, true to the voice and spirit of Mansfield’s own writing. I have taken liberty to flesh out and re-imagine some scenes and events for which conflicting documentation exists, adhering to a sense of truth as a mosaic. A vivid, richly detailed slice of life from Mansfield’s brief and often tormented existence, Katherine’s Wish celebrates Mansfield’s deep love of life, which never abandoned her, and its final message is a life –affirming one of joy and of wholeness achieved.
For readers familiar with Mansfield’s life and writings, I hope they will enjoy the sense of “full immersion” I have tried to evoke. Those who have never read Mansfield or don’t know much about her life will, I believe, be caught up in her spell, and in the drama of her courageous struggle against time.

“Lappin’s achievement is to succeed where medicine failed, and through her words, give Mansfield ongoing life,” The Literary Review, Dec. 2008

“[Lappin’s] writing style, with its rhythm, flow, and sensual detail, richly evokes the significant social scene of a vanished era….Katherine’s Wish is first and foremost the compelling story of an artist fighting against time. Long after the last page, thoughts of her linger like an exotic scent.” Rain Taxi on line, Jan. 2009

“Capturing the latter part of Katherine’s life and world, the author brings vivid life to this novel, which reads like a literary biography of Katherine Mansfieldand her contemporaries.” - Tess Allegra, The Historical Novels Review, Nov. 2008


Free podcasts of Linda Lappin reading from Katherine’s Wish are available from Itunes:

Isn't it exciting how one little idea or interest blossoms into something so much bigger--like a book? It sounds like the author put a lot of work into researching Katherine Mansfield's life. I am afraid to say I had never heard of Katherine Mansfield before this, but I am definitely interested now.

This sounds like a great book! I'm not super familiar with Katherine Mansfield's work, although I have read a biography of her, as well as a novel based on her life whose title I can't remember at the moment. (If you're interested, let me know and I'll try to figure out what it was. Whatever it was called, it was good!)