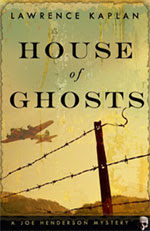 Imagine that Raymond Chandler wrote The Winds of War and you can begin to understand why House of Ghosts is such different and compelling detective story. Detective Joe Henderson is the modern incarnation of Philip Marlowe--hard boiled, hard drinking, hard loving, delightfully cynical, offering wry observations of life in the age of Starbucks.

The tale begins in the sweltering summer of 2000 when Preston Swedge, an alcoholic recluse and World War II veteran, has died in Westfield, New Jersey. At his estate sale, retired local police detective Joe Henderson discovers a 1944 diary describing a rogue attempt by a Jewish-American pilot named Paul Rothstein to drop his bombs on Auschwitz's killing complex where nearly 300,000 captives were about to be murdered.

With the fortitude of a Maccabean zealot and the patriotism of an American freedom fighter Rothstein had set out to defy his commanders who had prohibited any attempt to save Jewish lives. Joe Henderson's curiosity launches him on a crusade for the truth and a shocking revelation when he tracks down the last living witness who can solve the mystery of why the raid never happened.

Epic in its breadth, House of Ghosts sweeps effortlessly from contemporary Westfield, New Jersey to the Princeton University of 1939, and on to the aerial battle above Italy and Poland in 1944. Along the way you'll meet up with notables such as Charles Lindbergh, Treasury Secretary Henry Morgenthau, Jr., General Fulgencio Batista, and Alina Gilbert, the exotic dancer who helps to make this the hottest summer on record.

As I began reading House of Ghosts, I wasn't sure if it would be my cup of tea since it starts off like a traditional mystery book and I usually like mysteries that have a unique slant to them. However, as I continued reading further, I realized how intricate the storyline is and found myself fascinated with the descriptions of the war and how it affected each character in different ways.

The book is a compelling novel that combines elements of mystery with historical fiction. The inclusion of the historicals aspects adds depth and authenticity to the story and allowed me to become increasingly invested in the story. The shift in narrative from the different characters from the past, as well as the present allow for a wide range of perspectives and interesting sub-plots.

My one small issue was that one of the characters included in the book is an exotic dancer and while that may have been incorporated to spice up the book, for me that sexual content was unnecessary and detracted from the story. Nonetheless I really enjoyed my reading of the book and was intrigued by all that transpires. Not only does the book have an interesting storyline, it is also well-written and features great characters that I got to know very well.

Despite some extraneous material included throughout the novel, House of Ghosts makes for a very interesting and appealing mystery book that expertly combines historical fiction into its plot.

Lawrence Kaplan is a 1979 graduate of New York University School of Dentistry, runs a dental practice in New Jersey, and lives in Bucks County, Pennsylvania, with his wife and menagerie. House of Ghosts is his first novel. For more information, visit his website.

Larry Kaplan is giving away a signed copy of his book, House of Ghosts, to one lucky tour visitor. Go to Larry’s book tour page, http://larry-kaplan.omnimystery.com/, enter your name, e-mail address, and this PIN, 7975, for your chance to win. Entries from Bookopolis will be accepted until 12:00 Noon (PT) tomorrow. No purchase is required to enter or to win. The winner (first name only) will be announced on Larry’s book tour page next week.

Be sure to visit Larry's book tour page for more reviews, author interviews and guest posts!


BIG THANKS to Lance of Omnimystery for arranging this great tour.
Posted by Sheri S. at 6:00 AM

This book sounds interesting - a mystery with historical details. I'll have to look for it.

I've enjoyed this book tour! It's great hearing different viewpoints on a novel. Well thought out review. Thanks.