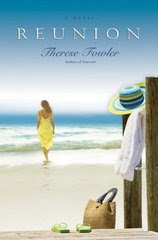 Published by Ballantine Books, a division of Random House, Inc.

About the book:
Celebrity talk show host Blue Reynolds is the queen of daytime television—she is smart, funny, and as down-to-earth as her adoring fans. In the eyes of the world, she has it all. But no one knows about the secret she has harbored for the last twenty years—a secret that could destroy her image, her reputation, and her career. Twenty years ago, she gave birth to a son and put him up for adoption through illegal channels. And every day since, she’s been filled with regret. Now Blue has hired a private investigator to find her son, knowing full well the consequences.

A week in Key West to do her show on location brings Blue a much-needed change of pace—and an unexpected reunion with an old flame, Mitch Forrester. Helping him launch a television series may help her recapture the kind of genuine romance and affection long missing from her life. But it also means having to deal with Mitch’s disapproving son, Julian, who is only nine years younger than Blue. Emotionally battered from his years as a war photographer in the world’s most dangerous hotspots, Julian struggles to get close to his father while making his disdain for Blue crystal clear—which makes his desire for her all the more shocking.

Reunion is a definitely a quick and light read. That is not to say that there is no depth to the plot or characters, but rather there is an ease about the writing that kept me reading. Blue's difficult decision to put her son up for adoption many years ago still haunts her and parts of the book focus on her struggle and coming to terms with that choice. That aspect of the plot is what drew me in to the book and kept me intrigued. In my opinion, the romantic elements felt secondary to the real plot and and the development and conclusion of the love triangle seemed too unrealistic, given its unique nature.
When it comes to depicting the book's settings, Therese Fowler does an excellent job. In particular, the descriptions of the luxurious Key West were very well-written and automatically triggered memories from a trip I took there years ago.
The book's ending presents some unanswered questions, which can either pave the way for a sequel or leave readers to their own imaginations. I enjoyed reading this book and though some of the plot development seemed unrealistic, it makes for a wonderful beach read, as the cover implies!

About the author:
Therese Fowler is the author of Souvenir. She holds an MFA in creative writing. She grew up in Illinois and now lives in Raleigh, North Carolina, with her husband and two sons.

BIG THANKS to Random House for my review copy and Dorothy for organizing this great Pump Up Your Book Promotion tour!

I've heard good things about this one. I'll have to keep it in mind for an easy summer read. Thanks for the recommendation!

Thanks for the great review, Sheri!

Great review for a book that sounds great!

i also read and reviewed reunion today for PUYBP! i enjoyed the book and also pegged it as a great gateway-to-summer book! thanks for the review.