Book Review: Time of My Life by Allison Winn Scotch 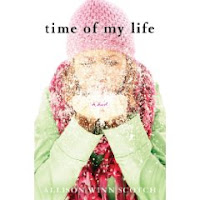 BIG THANKS to Random House for my copy of this book!

“Time of My Life” by Allison Winn Scotch

Published by Shaye Areheart Books, a division of Random House

"Time of My Life" is the story of Jillian Westfield, who wakes up one morning only to find herself living in her former apartment with her former boyfriend from seven years earlier, before meeting her husband Henry and having their child. After coming to terms with this ‘second chance’ at her previous lifestyle, Jillian starts enjoying being involved with her former boyfriend Jackson, whom she never quite got over, and embraces the job she once gave up to start a family. Armed with newfound hindsight, Jillian navigates through her prior life with great ease until she realizes that the greener grass of this former life may just be an illusion. As time goes on, she misses her daughter and wonders if there could have been some way to save her deteriorating marriage with Henry. Is this old life really a better path or merely just a different one with its own set of consequences?

This story is ultimately one about second chances and begs the question of "what if". What if you decide to take the road not taken? What if you had another chance at love with a former flame? What if you kept your former job and got that big promotion? What ends up happening to Jillian? You’ll just have to pick up a copy to find out!

I really enjoyed this book and devoured it in a single night. There is something very familiar and comforting about Scotch's writing and the characters she has created. I like that the concept of the novel is simple and yet holds so much possibility which Scotch took full advantage of by exploring Jillian's feelings and inner thoughts. I found myself very curious about where Scotch would decide to take this book until the very end. My only one wish is for the ending to have been more developed because I felt the conclusion was too abrupt.

While this book makes for a light read, there is much to take away from in terms of life lessons. People should make the best of their lives instead of wishing for other ones and there is really no 'right' direction in life but it is what you make of the one you chose that makes all the difference!

Be sure to check out Allison’s great advice for aspiring writers on her blog: http://www.allisonwinnscotch.blogspot.com/

That sounds really good - I'll have to try to get my hands on a copy.

What an interesting premise! This sounds like a good one. Thanks for the great review.

The sounds really good. Can't wait to read it.